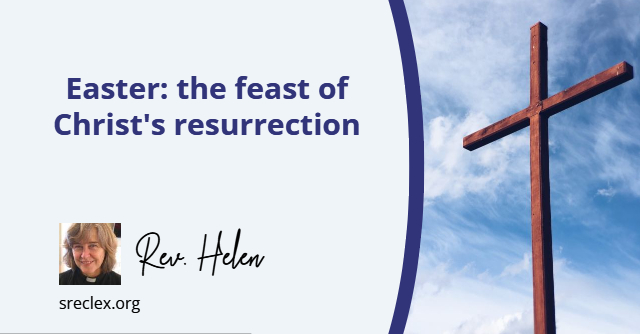 Easter: the feast of Christ’s resurrection. The early church overlaid traditional religious customs as Christianity moved through North Africa to Europe and around the world, reinterpreting those customs in the light of the Gospel of Jesus Christ. According to Bede, Easter derives from the Anglo-Saxon spring goddess, Eostre. Christians in England applied the word to the principal festival of the church year, both the day and the season.

Easter Day is the annual feast of the resurrection, the pascha or Christian Passover, and the eighth day of cosmic creation. Faith in Jesus’ resurrection on the Sunday or third day following his crucifixion is at the heart of Christian belief. Easter sets the experience of springtime next to the ancient stories of deliverance and the proclamation of the risen Christ, occurring as it does, in the west, on the first Sunday after the full moon on or after the vernal equinox. Easter Day always falls between Mar. 22 and Apr. 25 inclusive, and follows Jewish custom by beginning at sunset on Easter Eve with the Great Vigil of Easter. The Eastern Orthodox Church celebrates Easter on the first Sunday after the Jewish pesach or Passover (which follows the spring full moon). Although the two dates sometimes coincide, the eastern date is often one or more weeks later.

The Easter Season is called the Great Fifty Days, from Easter Eve through to the Day of Pentecost. From early times the Greek word pentecost (fiftieth day) has been used for the whole Paschal season. During this season there is no fasting. The Council of Nicaea (325) directed that Christians are to pray standing. The word “alleluia” (praise the Lord) is said or sung repeatedly, and added to the dismissals and responses, contrasting sharply with Lent when the alleluia is omitted. The color of liturgical vestments and hangings is white, and it is customary for the Paschal candle to burn at all services of the Easter season. The traditional Christian Easter greeting (“the Lord has risen indeed” Lk 24:34) begins each eucharist during the Easter season.

An interesting note is that our Sunday lectionary readings during the Easter Season do not include an Old Testament reading (the Psalm remains) – we spend the 50 Days focussing on the New Testament and the meaning of the Resurrection of Jesus for the early church and ourselves. It is an opportunity to focus on what are called the Stations of the Light, or of the Resurrection, or Via Lucis. I will print a version of the Via Sacris for your use in church during the Easter Season. It provides an interesting parallel with the Stations of the Cross. Begin the Via Lucis from the resurrection and move in reverse, from the 14th Stations to the 1st Station. The meditation offers insight into the death of Jesus and the meaning of the resurrection.

The Easter Season is also a new opportunity to sit outside, in your garden or in Tobit’s Trace to see Spring’s arrival, perhaps even to contemplate the Via Lucis in the beauty of nature.